Charlotte has been working as a animal health assistant at Tanglefoot Veterinary Services since September 2017.  She came on board to help the assist the technicians whenever possible.  She started her career back in 2008 in Nelson B.C and has since managed to gain quite a lot of experience with animal health assistant work.  Seeing as she has been horse back riding since she was just four years old, she is really excited to be working in a mixed animal practice.  Charlotte hopes to bring her horse who currently lives in Nelson to Cranbrook so she can enjoy riding with other people, and finally have more time to actually ride.  In her free time she likes to go x-country skiing in winter, and during summer she loves to run.  She is so excited to go exploring in Kimberley and Cranbrook, both for running and mountain biking.

Cali started with the clinic in 2018.  She is currently working part-time as she is taking the Thompson Rivers University Animal Health Technician distance diploma program.  Cali is passionate about horses and spends lots of her time riding and competing.

Jacquie volunteers for Tanglefoot Vet Services twice a week and helps out wherever she is needed. Jacquie and her Husband Lloyd moved to Cranbrook 9 years ago leaving Regina SK and 30 years of running a boarding stable behind. Jacquie still keeps a strong involvement with horses as her son is a professional Morgan trainer in the USA. Always busy, Jacquie has given lots of time to the local Maverick Riding Club and gives a few riding lessons as well.

Jeff started working with the Tanglefoot team in January 2018 as Practice Manager. He grew up in Brandon, Manitoba and graduated from the University of Manitoba in 1994 with a Bachelor of Science degree in Geological Engineering. After four years working as an environmental engineer in Manitoba and Saskatchewan, Jeff and his wife Pamela decided to change career paths and left their jobs to work in Japan for two years as Assistant Language Teachers.

Upon returning to Canada and completing a diploma in Photojournalism in 2004, Jeff worked as a photographer and writer in Cranbrook for two years before accepting an offer to work at College of the Rockies in the International Education Department. He has travelled to more than 20 countries for work and for play, including parts of Africa, Asia, Europe, North America and South America.

After almost a dozen years working at the College, including more than five years as a manager, Jeff was ready for a new challenge and he is very excited to be part of the kind, dedicated, caring and fun staff at Tanglefoot. Jeff lives in Kimberley, BC, with his wife Pamela, their two children and “Paisley” the dog. 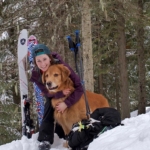 Originally from Thunder Bay, Ontario, Amanda moved to Fernie in 2016 to ski and mountain bike in the mountains. After working as a Registered Nurse in both Ontario and BC for 4 ½ years, she decided to pursue her long-term dream of working in veterinary medicine and started working at Tanglefoot Fernie as a Vet Tech Assistant. In the future Amanda’s goal is to become a veterinarian. When not working, Amanda can usually be found skiing, mountain biking, hiking and camping with her giant Golden Retriever, Cooper. 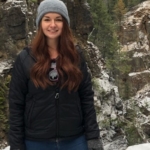 Kate is originally from England and moved to Canada in 2016. She worked in the hospitality industry for 10 years before joining the Tanglefoot team, and she is currently studying to become a veterinary assistant. In her spare time Kate enjoys snowboarding, hiking, travelling and crafting. Since moving to Canada, Kate has adopted two cats, Buffy and Patterson, and two chinchillas, Artemis and Athena.

Steve is our welcoming committee.  He joined the team back in November 2013 when he was already 2 years old.  He was adopted from the local SPCA.  Steve loves everybody and very much enjoys when clients pet him and if you have treats you have a friend for life.  In between naps he loves to hunt crickets, play hide and seek, step outside to enjoy the sun, or just relax with some cat yoga (you need to see it to believe it)